Vitamin B12: properties, benefits and foods that contain it 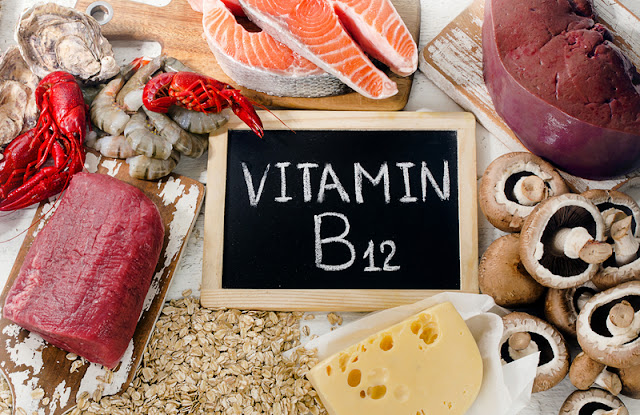 The vitamin B12 , or  cobalamin , is essential in several physiological processes, such as the formation of red blood cells , so much so that the factor is anti-anemic  best known. Furthermore, it is an essential vitamin for having a healthy and well functioning nervous system.
Your body is unable to synthesize this substance on its own, but must necessarily take it with food . Those who choose a  vegetarian  and vegan diet  could suffer from a deficiency of this vitamin, since it is found almost exclusively in foods of animal origin. Find out more about why it’s important and how to fill up with the right nutrition.

Vitamin B12 owes its name to the presence of a Cobalt ion at the center of its chemical structure, while the isolated form is called cyanocobalamin due to the addition of a cyande ion. This form, extracted mostly from natural sources and added to fortify many foods, is quickly converted into the body in its natural form to be easily absorbed.
It was discovered during studies on anemia and isolated for the first time in the liver: the understanding of its particular chemical conformation earned the Nobel prize to the British crystallographer Dorothy Hodgkin in 1964.

Vitamin B12: benefits and properties

The main biochemical role of vitamin B12 is to mediate DNA and RNA replication (along with folates), making cell renewal possible. It also comes into play in assisting isomerization reactions in the metabolism of many molecules: this type of chemical reactions are important in the development and production of energy .
Vitamin B12 is crucial for optimal development of red blood cells and participates in the metabolism of homocysteine : it converts, that is, this amino acid, which if present in excess can cause cardiovascular damage , in methionine, a harmless amino acid, thus reducing the risk of heart attack.
It is also important for the functions of the central nervous system and for the synthesis of dopamine and noradrenaline, compounds produced by the adrenal glands in response to situations of psychological and emotional stress.
Very often supplements with B-group vitamins (including B12) are used to feel less tired and reduce stress : all this results in a feeling of general well-being that can help you be more concentrated, improving cognitive functions .

The need for vitamin B12

The LARN (Nutrient and Energy reference intake levels) in their IV revision (2014) indicate in 2,4μg / day the recommended intake of vitamin B12 for the population (PRI) in adults : this value is recommended both in men that in women, while in pregnancy it rises to 2,6μg / day and lactation to 2,8μg / day to ensure an optimal concentration of this vitamin in breast milk.

Vitamin B12: where to find it 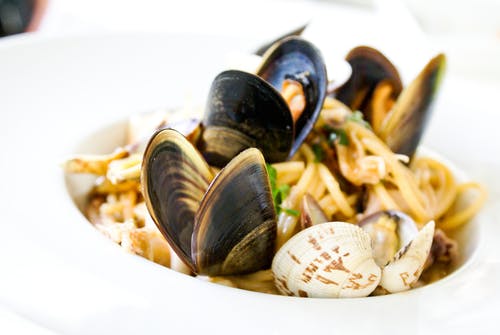 Vitamin B12: deficiency risks and how to avoid them

To date, B12 deficiency in industrialized countries is quite rare, but particularly at-risksubjects are the elderly, smokers, those who have undergone gastric resection or distal ileus. The pregnant women must provide appropriate additions, as well as those who follow a vegan or vegetarian diet.

Vitamin B12 deficiency: the causes

The absorption of vitamin B12 occurs at the intestinal level, but only after the link with Castle’s intrinsic factor produced in the stomach: this vitamin-factor union allows the internalization of the vitamin, which alone could not pass the intestinal barrier.
For this reason, B12 deficiencies are not always primary, that is due to its poor intake , but may also depend on secondary factors, such as genetic alterations that can lead to intrinsic factor deficiency or to intestinal diseases such as Crohn’s disease, the celiac disease or possible intestinal resections that lead to an inevitable malabsorption .
Its deficits are very often associated with concomitant folate deficiencies, because they are two intimately related biochemical vitamins: a high intake of folic acid very often tends to mask cobalamin deficiency,

Important symptoms of deficiency are “megaloblastic” anemia , with the formation of unripe red blood cells, and neuropathy , while in milder cases apathy, confusion or mood changes such as irritability or chronic depression may occur .
Vitamin B12: supplementation during pregnancy 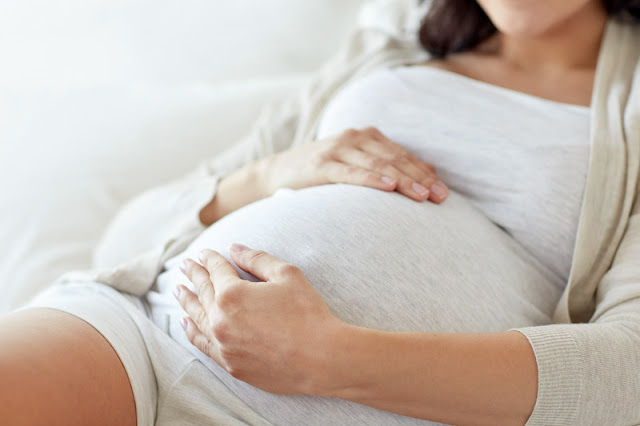 Pregnant or lactating women have a significantly increased need for B12 and folate: in these cases supplementation is strongly recommended to avoid defects in the nervous system in the child.

Vitamin B12: how to integrate it into the vegan and vegetarian diet

If you follow a vegan diet it is impossible to avoid vitamin B12 deficiencies, because this vitamin is present only in foods of animal origin . The algae are little help meet the daily requirement: the vitamin B12 contained spirulina algae is present only in trace amounts and little bioavailable .
The vegetarians have a smaller risk of deficiency because this vitamin can be found in foods such as milk and dairy products and eggs. In the first case, an integration is strongly recommended, in the second case it may be useful if the blood tests have highlighted the need for it.
The advice to supplement vitamin B12 is to use both fortified foods and supplements. In supplements, this vitamin must be in the active form, which the body can transform more easily and then to absorb optimally. When taking supplements, in vegans and vegetarians it would be good to combine the consumption of fortified vegetable drinks with B12, such as coconut milk, almond milk, rice milk, oat milk.
Given that the absorption of B12 is linked to the intrinsic factor at the gastric level , it is important to take supplements under medical supervision , so that the dosage can be studied and re-modulated on the actual blood values ​​that occur over time.

Vitamin B12: the factors that can hinder absorption

It is important to pay attention to some compounds that may decrease the bioavailability of B12 , such as alcohol or vitamin C which reduces its content in foods.
Also the drugs can reduce the absorption of vitamin B12. Among these, those that act at the gastric level such as proton pump inhibitors and antacids: by decreasing the gastric acidity they create, in fact, an imbalance on the pH of the stomach that does not allow an optimal bond between B12 and intrinsic factor (link necessary so that the B12 is then absorbed by the intestine).

Vitamin B12 against pernicious anemia

Vitamin B12 is used as a treatment in those rare cases of pernicious anemia , a form of anemia caused by a deficiency in the absorption of this vitamin. The dosages range from 1 to 5 mg / day: the intake, although in concentrations so important, did not show any cases of toxicity.
Already 1mg oral values ​​are able to give good results even in older subjects: such high values ​​in fact determine an important absorption of the vitamin regardless of the presence of the intrinsic factor. Furthermore, since the water-soluble B12 is easily avoided the risk of therapeutic overdose: if it should occur, the vitamin would be readily excreted in the urine.
The therapy must be done under strict medical supervision and is based on the chronic intake of the vitamin orally or sublingually until the recovery of blood values ​​including MCV (average corpuscular volume of erythrocytes).

Vitamin B12 in the kitchen 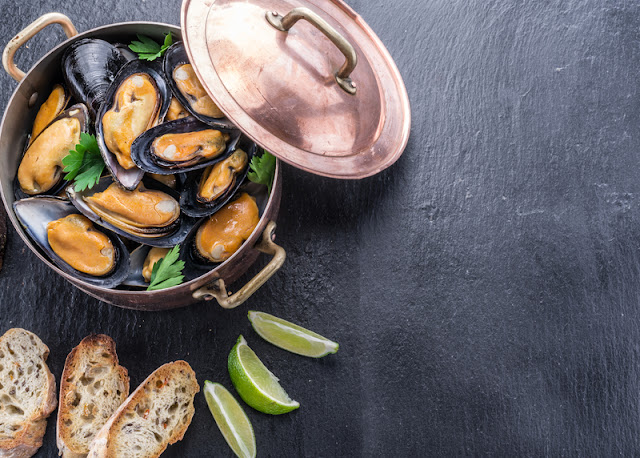 Vitamin B12 is a heat-resistant vitamin : this means that cooking does not reduce its bioavailability. However, it is particularly sensitive to ascorbic acid (vitamin C) , so it would be good to avoid seasoning foods rich in B12 with lemon or other citrus fruits.
The recipes can be really many. However, to have important contributions of cobalamin it would be better to favor meat or fish based main courses , which are richer than the first cereal based dishes.
Among the meats, the entrails (especially the liver) are particularly rich, especially those of ox or sheep.
Among the fish, we find large quantities of them in seafood (oysters, mussels) , precisely because they are heavily populated by microorganisms that produce this vitamin, but be careful not to spoil everything with lemon!
A good recipe could therefore be a fillet of seared salmon or beef liver, perhaps accompanied by fermented vegetables such as sauerkraut: the fermentation process (of many vegetables, as well as soy for the preparation of miso) increases, in fact, much of the B12 content in foods .